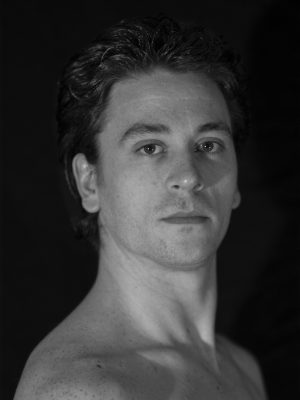 Mr. Burnham was born in Lake Tahoe, CA and started his ballet training at Santa Cruz Ballet under the direction of Robert Kelly and Diane Cypher. He continued his training in Washington State at Mid Columbia Ballet under Debra Rogo. At age 13, he received full scholarships to San Francisco Ballet, American Ballet Theatre, Pacific Northwest Ballet, and Houston Ballet. In 2004, he joined San Francisco Ballet where he performed in such ballets as Helgi Tomasson’s “Meiston’s Mozart,” and Balanchine’s “Stars and Stripes” and “The Four Temperments”. In 2006, Mr. Burnham joined Cincinnati Ballet where he danced many lead roles. He has worked with choreographers Jorma Elo, Val Caniparoli, Mark Morris, Trey McIntyre, James Kudelka, and Twyla Tharp. In 2009-2011, he performed with Ballet Theatre of Maryland dancing such lead roles as Romeo in “Romeo and Juliet” and the Cavalier in “The Nutcracker.” In May 2012, Mr. Josh joined MBT as a principal dancer, and in 2014 he became a teacher for MBA. Mr. Josh began teaching in Ohio in 2008, and has been teaching in the DC area since 2010. He has taught at Ballet Theatre of Maryland in Annapolis, C&C Dance Company in Bowie Maryland, Strictly Rhythm in Alexandria Va, Encore Performers in Chantilly VA, and is on faculty with Flow 40 Dance Workshops Inc.

Tickets selling quickly for May